D. W. Blackmore gives the geographical facts and links them with the geology of the district (and with meteorology) in the Transactions of the Croydon Natural History & Scientific Society for 1951:

“The Croydon Bourne appears in the Caterham Valley following periods of excessive rainfall, particularly winter rainfall, and is due to the water table in the chalk rising above the floor of the Valley. It makes its first appearance in the channel at the rear of The Rose and Crown Inn , Kenley, near a forked ash tree and, when risen to its full extent, presents a continuous stream seven miles in length from Bughill Farm, Chelsham to the outfall in Wandle Park, Croydon.”

The Bourne from Source to Mouth: based on a tape-recorded interview with the late Mr William Sandiford made on 30 September 1957. From the Bourne Society Bulletin May 1980:

“We used to get heavy snows in our young days and the Bourne rose approximately every seven years. We used to think it foretold some disaster. It commenced just under the viaduct on the left of the Woldingham Road as you go from Caterham. It then flowed along by the road to Wapses Lodge. It also rose there to a certain extent, but not much. It bubbled up underneath the crossing. Where the roundabout stands now, there was a very big pool which reached up to the cottage. Of course, we boys used to have rare fun. From there it ran through a field in an open stream to Well Farm, under the road by the old Caterham boundary just beyond Whyteleafe South Station, across a field down to the railway, underneath it and out to where there is a recreation ground now. 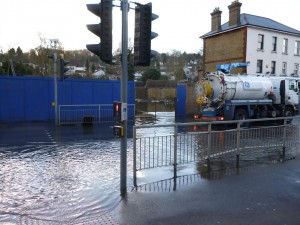 On to Whyteleafe Station, and through the back gardens till it crossed the road where the gasometers are now. Here it formed a large pool of water (later known as Gasometer Lake). It again crossed the road by The Rose and Crown and flowed down where the dust destructor, the recreation ground and allotments are now. It went close to the waterworks and in fact I have known when I had to work day and night to deepen the ditch to keep it out of the reservoir. It flowed along to Kenley before falling steeply down into Little Roke, it passed in an open stream before going under the railway and into what is now Waterworks Yard.

It crossed the main road by the public house and followed more or less the line of Purley High Street in an open ditch and it finally went underneath the road by a church. There was a bridge there which they used when the Bourne rose.  At The Royal Oak there was a lot of water because gravel had been taken out there. It was right open again as far as The Windsor Castle. Then you did not see it again till you got to Haling Park. In front of a house there is a big dip like a big bowl and that was always full of Bourne water and the shops opposite would get 2-3ft of water when the Bourne rose. Then you didn’t see it again. It was taken in pipes through Old Town, Croydon and right away to the Wandle in Wandle Park. This was once Wandle Marsh. Here they would dam up the stream and wash the sheep. Old folk knew it as the Sheepwash. That is where the Bourne ends.”

“ In about the 1920s Charlie Moore won a life-saving medal – He was a jobbing gardener and a member of St John Ambulance. One day near Lower Warlingham Station (now Whyteleafe South), the chain of his bicycle came off and he had to stop to put it on again. He saw some people gathered around a manhole where the Bourne water was flowing. The water went along an open ditch towards the station and then went underground.  Apparently a baby had gone missing out of one of the gardens and the men were sure that the baby must have fallen into the ditch and been washed down into the underground culvert. So Charlie went down the manhole, but he was nearly overcome, and had to come out to get some fresh air before going down again. He found the baby, but it was dead. He was awarded a life-saving medal for his attempt.”

“ Before the building of the Caterham by-pass, when the Bourne flooded, the whole of the area formed by the present sunken roundabout at Wapses Lodge would flood. This area of water became a wonderful play area for local children – sailing boats or floating tin cans to provide targets, but best of all for rafting. The ‘rafts’ were actually the large gates from premises in Croydon Road – I believe it was the Caterham Transport Company. These gates were on pin hinges that enabled the older boys to lift them off and float them. They were not particularly stable and unless you made sure you balanced the load it would tip its contents into the water, which did not make the sport very popular with parents. The culverting of the Bourne put an end to that fun.”

In 1968 James Batley in a local newspaper article described the onset of the unusually prolonged Bourne flow that year:

“In 1968 on October 19, the uppermost evidence of the Bourne’s uprising was in the basement of the unfortunate Mr Gurr of  Marden Lodge – the water level was 3 ft below ground level and 2 ft above the basement floor. The Bourne first broke surface by the gate into the school sports field just below the railway viaduct. 100 yards down the water could be seen bubbling up through the grass”.

Under the Givaudan and Rank Organisation buildings the Bourne caused trouble. Mr Pope, Rank’s engineer, had to employ six pumps to prevent the water rising in the boiler room, where the Bourne water appeared to have a level some 3 ft above the boiler room floor.’

He added the following musings:

In the early weeks of 1988, the Bourne has brought itself to prominence causing flooding and consternation along its course. It is the best flow since 1968 and has necessitated warnings – and sandbags – from Croydon and Tandridge Councils. Whyteleafe County First and Middle School was closed for 3 days in February because of flooding and Woldingham Road had to be closed with dramatic stretches of water around the viaduct and the riding school stables. In Kenley fire fighters were called to Bourne View and the allotments were also flooded. The Coulsdon branch was also flowing freely by Coulsdon South Station. Ron Dabbs and Roger Packham were busy answering questions from local newspapers.

The main headlines in The Caterham Mirror (18.2.88) were ‘Doom river flood’ and The Coulsdon & Purley Advertiser on the following day printed a photograph of the 1904 flood and historical notes by Mrs. Faulkner. The Croydon Comet (26.2.88) had a photo of firemen mopping up in Kenley under a heading ‘Flood alarm’ and The Croydon Post (9.3.88) included a photo of ‘the mighty Bourne’. The well-known tales of disaster were given a good airing and the flow was expected to continue for some weeks. Despite a dry Easter, a close watch will be kept on the lively veteran when the Spring rains arrive.