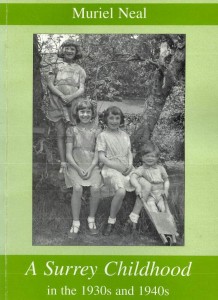 Muriel Neal (née Hunt) was born in 1930 and descriptions of her childhood give a vivid account of a time when the pace of life was rather slower than at the start of the 21st century, and at the same time her young teens were strongly influenced by World War II.

Muriel grew up mainly in Caterham, but spent time at South Godstone and Hindhead. Her family lived in Bletchingley for a year during the war.

She describes her family and friends, their neighbours and their surroundings. Her schooldays come alive as do family visits, the excitement of summer seaside holidays, a long stay at Wanstrow in Somerset and her first job at Great Ormond Street Hospital.

Her remarkable memory of the world around her when she was young gives an entertaining insight into childhood with which many of her generation will readily identify.

Since this volume is now out of print and unlikely to be reprinted, the Bourne Society has decided to make the full text available as a PDF document.

Please click or tap A Surrey Childhood to open the document in a new window.