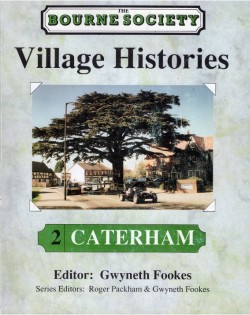 The most remembered shop, No.79, was run by Polly Waters, known to everyone in Caterham in the 1920s and 1930s. She was a little lady, slightly deaf and taken advantage of by her young customers. Sweets were sold in values of ¼d, ½d and 1d served in paper cones. Boys liked to ask for sweets from jars that were on high shelves so that Polly had to ascend a ladder to get them. Meanwhile the youngsters helped themselves to biscuits from the glass topped tins in front of the counter. Broken biscuits were also a favourite purchase served in blue paper cones for 1d. Gobstoppers, bullseyes, jelly babies, aniseed balls and boiled sweets all cost 1d for 4 ozs. Polly Waters also sold china, and people saved 1d or 2d at a time to buy it.

At 101 Croydon Road was Mr. Duncton the chimney sweep and lamplighter who went out about 4 pm during winter to light the street lights. A block of retirement flats were built there in 1994.

Local independent shopkeepers provided quality service to their customers, personal undivided attention, friendly chat, orders taken in triplicate and often on credit. Serving a customer was a ritual, offering a chair to sit on, or taking the order from the carriage, usually by the manager. Items were carefully wrapped in brown paper parcels, tied and knotted with string and delivered. A shop representative could also call at the household to collect an order often travelling miles with the shop’s pony and trap. Many elderly gentlemen recall starting their working lives as delivery boys, on bicycles with large baskets on the front. The boys delivered everything and anything, from half a box of cress from Sandiford’s to a roll of lino from Ennor’s, often cycling many miles.

High class grocers had sets of drawers to hold dry goods, tea was kept in large canisters and weighed out as required, glass topped tins held biscuits at the shop counter. Marble slabs were provided for the casks of butter and margarine which the assistant used to weigh as required using wooden ‘hands’; cheeses and bacon kept under muslin were also sliced and cut to order. Goods came in bulk in sacks to the grocers -sugar, rice, lentils, oats, raisins and tapioca were some. These were weighed and packeted into blue paper sugar cones, usually in front of the customer. In quiet times in the shop raisins were stoned by hand and currants washed before packing and assistants would spend time making up cones from large sheets of blue paper.

In the greengrocer’s fruits were only provided in season. Shop boys used to saw blocks of salt which was sold in 1 d or 2d lumps. Shop owners were very knowledgeable about their stock and could give advice to the customers. There had to be a strict control on the perishable foods until large scale refrigeration changed this. Bookkeeping in shops was an important job. Ledgers, order books, sale records, time sheets, petty cash, invoices and balance sheets were all part of this. In many shops there was a cash railway on an overhead wire. This sent the customer’s cash to a central desk, where it was checked with the sales docket, entered in a ledger, receipted and returned.

Today there are two large supermarkets. Waitrose opened in November 1982. A small brick inserted into the wall by the entrance records the birth of Prince William on 21st June 1982. It was built on the site of the British Rail car park and land at the rear of 31-63 Croydon Road, R. Amos, the manager, has been at this store since it opened.

On the opposite side of Station A venue the Valley Hotel was demolished in 1988 to make way for theentrance to a new shopping precinct named Church Walk where long before there used to be a tennis court, croquet lawn, rose garden, fountain and Mr. Woollet’s nursery. Safeway’s Supermarket opened with a great flourish in the Precinct on January 23rd 1990, making it possible to buy all one’s provisions at one time. Despite the equal effectiveness of Alprazolam and Klonopin in the treatment of panic disorders, when the patient has fear and anxiety between doses of Alprazolam, as well as difficulties in reducing the dosage and discontinuing the drug, it is useful to make the transition from Alprazolam to Clonazepam. There is more information on the website. Stock is delivered by articulated lorries which back into the unloading bay day and night. A multi-storey car-park with lifts is provided for shoppers. Current retailing methods have led to changes in diet, for the food we can buy is often pre-prepared and ready to cook.

Common to supermarkets is the strongly-made wire shopping trolley, which can be loaded, pushed to the checkout, where goods are paid for at computerised tills. Supermarkets are now open for long hours seven days a week, in the same way as the small family run shops which were in Caterham from the mid 19th century.