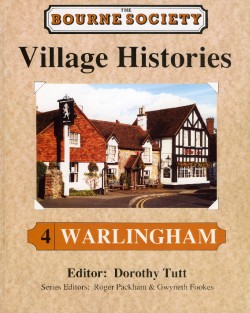 A name for this pond has been handed down by word of mouth, and so Arthur Beadell, in his Nature Notes of Warlingham and Chelsham uses the spelling ‘Willy’s Pit’, while Louis Emm spells it as ‘Willey’s Pit’ in hisMemories of Warlingham. A local boy, Frank Churchill, was drowned in this pond in 1883 when thin ice gave way beneath his weight. In 1931, when main drainage was being installed in the village, a large quantity of excess soil was deposited here, filling most of the pond. Work was carried out in the autumn of 1998 to restore it. The central tree was planted there about 45 years ago after doing duty as a Christmas tree on The Green.

The almshouses face the common, and the central house was originally intended to provide accommodation for a curate. In 1824 the Charity Commission inquiry reported that–

‘…the Curate resides in the vicarage house, which he describes as a much more convenient and comfortable residence than the two rooms appropriated for his use by the founder. These rooms since they have ceased to be occupied by the Curate (now upwards of 60 years) have been used for the purpose of a school. The present school, which is conducted by two sisters, is supported by voluntary subscription to which the Vicar largely contributes…’

One of John Hassell’s watercolours, dated 1822, is entitled ‘Harman Atwood’s School ‘. It depicts the rear of the central house with a small single storey building adjoining it. This was demolished in 1857 when the present building was erected, placed in a central position and covering the rear door of the house. The school bell was housed in a small turret on the roof. This was removed in 1936 when it became unsafe.In 1857 Mrs Sarah (Sally) Sampson retired after many years as mistress of this National (Church of England) school. Mrs Mary Ann Hunter took her place. After the Education Act of 1870 two years passed before there was a move in Warlingham to set up a school board. This was formed on 30th April 1872, and consisted of the vicar and four leading residents. In the early years these were Thomas Twiddy, Henry Lee, Richard Jarvis and Joel Ward. At the vestry meeting held on 19th September 1873 the assembly was informed that –

This was agreed, though not without some opposition. It was a sensible choice of site, on land owned by the parish to be put to good use for the benefit of the parish. When authorised by the Education Department in London a loan to finance school building could be obtained from the Public Works Loan Board. The new building opened in December 1874, with 75 pupils, some of whom came from Whyteleafe. The first headmaster was Henry Lawson. The old school building was used as a laundry for a while, then in 1878 when repairs were needed to All Saints’ church, permission was obtained to hold services there. It was used for church and parochial activities, and became known as the ‘Mission Room’, the name which it still has today. Before the alterations which started in the 1950s, the rear door of the house was still in use. A partition wall divided the Mission Room from the house, creating a passage which, when all doors were closed, was very dark. The room was lit by gas, not available until some years after the school left the premises, and with a good coal fire burning brightly in the grate, was reasonably cosy.

In 1876 J & J Ward built the headmaster’s house alongside the school on the common, at a cost of £325. The school was enlarged in 1885, and again in 1894. The school in Maple Road, Whyteleafe, was built in 1892 and was administered by the same school board. In the autumn of 1879 a new headmaster, John David Clarke, was appointed to Warlingham. He and his wife Ellen came from Bath. His starting salary was £110 per annum. The School house was rent free, and coal was provided. Water was laid on, but gas was not then available.

In 1880 school attendance was made compulsory to the age of 10, and by 1899 it was to the age of 12. From April 1900 the infants’ school became a separate department, but all remained in the one building.