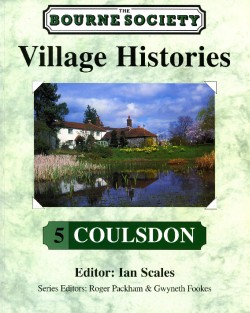 Another large housing development in Coulsdon since the war was the Wates Estate, built in what had been a pleasantly wooded area between Byron Avenue and the railway. There was a fearful row before they were allowed to build, but it must be admitted that Wates took great trouble to retain many of the trees and Coulsdon Woods is now accepted as a very pleasant addition to our community.

Whilst it was being built a whole new chapter of prehistory was added when the digging of a drainage ditch in 1969 uncovered a cemetery dating back to Roman times. It had been known since 1805, when the Stoats Nest quarry was being developed, that there were traces of early settlement on that hill, but that these ditches were defensive, round an Iron Age settlement, did not become apparent until this latest dig. A more detailed description of these finds is recorded in Volume 9 of the Bourne Society’s Local History Records (1970).

Infilling to give additional houses in established roads has been a feature of recent development, with dozens of additional ‘Closes’ to be found, where one house has been demolished and several others built in its place clustered round their own service road. This system must account for hundreds of extra families being able to enjoy the clean air and superb countryside of our suburb.

The Wates Estate was not the only remnant of countryside left over from the developments of the past 50 years. Some still survive but others exist only in the memories of residents. Take the modern library in Old Coulsdon, built in 1963 on a small plot between Bradmore Green School and the houses at the top of Bradmore Way. There are grown-ups now who recall a small wood there which was a wonderful place in which to play. It seemed enormous, with pathways twisting between tall trees and thick bushes, a wood of truly Enid Blytonian proportions—just one example of many that have gone. Fortunately there are still acres of wooded land within the boundaries, one of the largest of which is that below Coulsdon Court Golf Course and Canon’s Hill, down to Old Lodge Lane. The least altered woodlands left today are those bordering Ditches Lane—Devilsden, Sparkie and Figgs Woods. Some say the line of yew trees along the north-east flank of Farthing Downs goes back to Celtic times, 2000 years ago, but in truth it is nowhere near this grand age.

The rush for new housing in the 1960s had a down-side too, with the demolition of a number of historic buildings, mainly on the excuse that the site was needed. In some cases buildings had been derelict, but in others the clearance was quite unnecessary and an earlier example of this was the demolition of the Round Lodge on Grange Park facing Bradmore Green. Dating from Victorian times, the Lodge protected an entrance to The Grange and had been lived in by the first old age pensioner in the district to receive Lloyd George’s weekly bounty: 5s. 0d at the time. The site has only recently been developed following use as a council depot. Parson’s Pightle has been referred to above; it is but another house, this time from the 18th century, to be pulled down. Hooley House had perhaps outlived its value as a historic monument, having been extensively developed throughout its 800-year life. Nonetheless the demolition in 1971 of what was by then known as the Ashdown Park Hotel appeared to be pure vandalism, though at least in this case a new estate was eventually built, after more than a decade of indecision. The lodge house at Hooley House remains and will celebrate its bicentenary in 2020.

To a visitor returning to Coulsdon after an absence of a number of years, the change that would strike home most forcibly is the increase in traffic. In the late 1940s the war may have been over, but Pool petrol was still rationed, and anyway it was nearly impossible to buy a car since practically all production was exported to earn foreign currency, necessary if Britain were to payoff its debts and avoid bankruptcy. Only the war survivors were taken for short journeys on the empty roads. Of course these shortages were temporary and by the 1950s the traffic was building up. Plans were laid to bypass the A23 through Coulsdon with a new ‘Motorway’, the M23, but this was not to be. In 1965 Coulsdon became part of the London Borough of Croydon and when in 1971 the Greater London Council, with its changed political majority, had a look at the budgets for both roads and housing, it determined that no new motorway would enter its territory, with what would have been the inevitable clearing of whole streets of houses all the way through to Streatham.