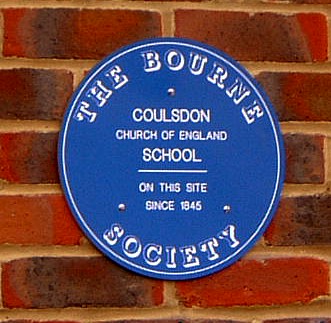 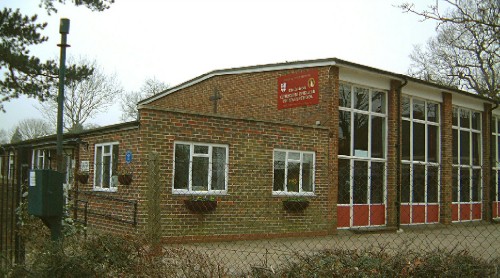 In 2004 the Bourne Society offered to mount a blue plaque at the school, in keeping with our policy of marking historical sites and buildings in our area. The offer was gratefully taken up and a date was set, 3rd March, for the formal unveiling, the delay being to allow coincidence with a ’round’ number of years since the Rector obtained a grant of land on Bradmore Green from the squire, Thomas Byron III for the purpose.

The intervening years have seen the original school replaced by one more suitable to modern requirements – light, heating, flush toilets – so the plaque wording refers to the site rather than the building itself. The location was agreed with Mrs Hilary Grainger, the Head Teacher and with the School Board, meeting our request that it should be visible to both students and passers-by. The date was set and Helen Young, famous BBC weather reporter and former pupil, agreed to unveil the plaque. Despite her connections, Helen was unable to lay on suitable weather for outdoor unveiling – 3rd March turned out to be in the last knockings of a late winter fortnight of snow, ice and frost.

However, the unveiling was but one item of the anniversary, which started with a celebration in St John’s church, overflowing with some 400 students, staff and visitors, regaled by each class year acting out an item from the school history or performing their speciality of singing or dancing. The whole was a service of thanksgiving led by the Rector, the Revd Paul Roberts who also displayed his outstanding ability as an organist. A noisy, friendly and thoroughly enjoyable meeting all told, though what the founding monks from Chertsey Abbey 800 years ago would have made of it boggles the mind.

Back across the Green to the school, then, to warming coffee and biscuits, served by the students, along with much chat between past pupils who hadn’t seen each other for years or decades and a chance to meet Helen Young, a charming product of her education here. Of course, coffee and conversation took far longer than the time allocated and a dancing display by the children was much delayed, but well worth waiting for.

Hilary Grainger then introduced Helen Young to us all and invited her to unveil the plaque, which was in a place of honour mounted on a display board in front of a montage of school memories. Helen thanked us, fondly recalled her time at Bradmore Green and then to loud applause pulled the curtains apart to reveal the Bourne Society’s plaque.

Since then, the plaque has been mounted in its permanent position by the corner of the school office building, close to the footpath, visible and legible to all who walk past.