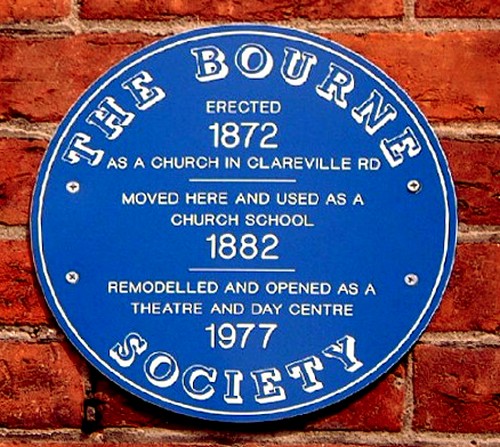 The plaque was unveiled by John Bailey Smith who provided the following report:

On Saturday, 4th March 2006, some 50–60 people gathered at the Miller Centre in Godstone Road, Caterham, for the unveiling of a Bourne Society Blue Plaque. The Plaque commemorates the triple use of the building and I gave a brief history of the building and my family’s connection.

In 1867 a Mrs Elliff, a keen churchwoman, started a church school at her house at 55 Croydon Road, assisted by her two daughters. This house would have been about where the end of ‘Blockbuster Video’ adjoins the entrance to the Waitrose car park. Initially there were 13 pupils, but by 1872 this had grown and a new schoolroom was built. In the same year, a temporary or ‘Mission’ church was built in Clareville Road, probably next to the present church on land that was subsequently occupied by the Vicarage – now an old peoples’ home. There is a local story that a bishop visiting Caterham asked to be directed to the church and was taken to the – then – Congregational Church with its splendid clock tower in Harestone Valley Road. When he saw the tiny Mission Church, the bishop is said to have decided that his flock should have an equally good church. Thus in 1882 the present church was opened and the old one was demolished and re-erected on its present site in Godstone Road, a local builder, Charles Scrivener, carrying out the job for the princely sum of £100. Scrivener had premises in Godstone Road, most likely where ‘Caterham Valley Computers’ is now, as this was for many years a builder’s premises.

The old church now provided a solution to the school’s problems of overcrowding and St John’s National School opened in 1882 with a Miss Holeyman as Headteacher and with Mrs Elliff and daughters as assistants. It has been suggested that Miss Holeyman’s appointment was down to the Vicar; the more likely but less amusing reason is that she was a properly qualified teacher. The school had two large classrooms, but in 1888 it became necessary to add another classroom and further alterations were made in 1895. In 1911 the land at the rear was acquired for a playground and at about this time my father became a pupil, together with his brother and two sisters. My father had been at the Board School in Beechwood Road but had refused to be punished for something he had not done, and as challenging authority was not permitted in those days he was expelled. His parents accepted that he was telling the truth and removed the other children as well. At St John’s the Headmaster, Mr Hedges, was attempting to keep bees but without much success; however he discovered my father was a keen beekeeper and quite knowledgeable, the upshot was that father went from pest to pet. In 1938 with the continuing expansion of Caterham Valley it became impossible for the school to cater for all ages and it became a Primary School.

On 16th October 1944 Margery, my father’s youngest sister, became a teacher at the school staying there until she resigned to re-start her Prep School in the Autumn of 1946. It wasn’t until 1958 that the next generation arrived when our daughter Alison started and made her mother proud by receiving the Managers’ Prize in 1965. Our son Paul joined in 1962 and although – like his sister – passing the 11 plus, he did not receive any prizes. We put this down to his attitude when asked to join in the Maypole dancing on Timber Hill, which he considered beneath his dignity – as the expression on his face clearly showed when eventually forced to take part.

In 1969 a new school was built in Markfield Road and the old school became Infants only, finally closing in 1975 with completion of the new schools. In 1977 the building entered its third life, having been purchased by the Park Hill Trust, and was adapted as a Theatre and Day Centre/Club, and named The Miller Centre after Dorothy Miller who had formed The Caterham Players in 1946.

At the conclusion of my talk I was delighted to introduce Jill Elliff, the last of the family in Caterham and a descendant of the first Headmistress.