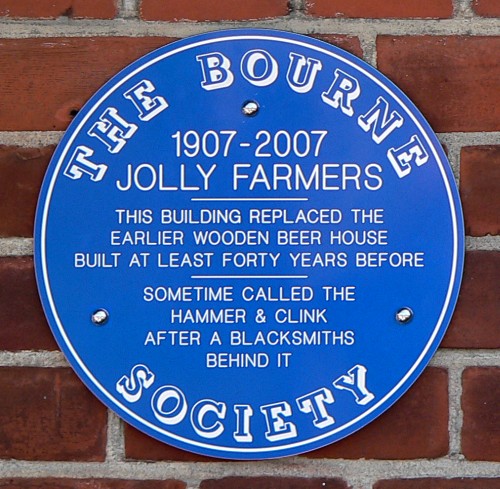 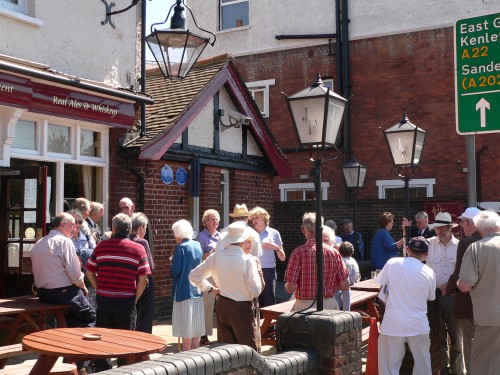 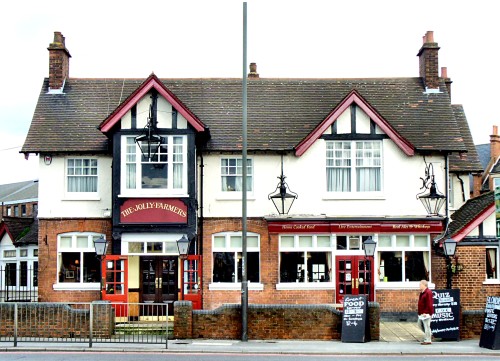 ALL THE ‘t’s had been crossed and the ‘i’s dotted in the preparations for the unveiling of two Bourne Society plaques at The Jolly Farmers – the plaques had been received, Croydon’s mayor and mayoress had been invited, Ian Harris, the owner of the pub, was enthusiastically finalising plans for events to fill the day in celebration of its centenary. And within half an hour on 20th July everything changed. During a torrential downpour the centre of Purley flooded and passing traffic sent waves of water into the pub. Staff frantically tried to stop it, but eventually the water filled the pub cellars to a depth of about five feet. Flooding in the area was so severe that the Advertiser produced a supplement with pages of flood stories and photographs.

The Jolly Farmers had to close for weeks, so that it could be dried out – carpets and fittings had to be discarded, leaving bare wooden floors, with the result that on the day of the designated plaque unveiling – 4th August – it was still closed. Ian Harris was determined that the unveiling should proceed and he brought refreshments in for the 50 or so people who attended. The day itself was brilliantly sunny and the Mayor of Croydon, Councillor Derek Millard, did the honours and he and Mrs Millard spent a pleasant hour with members of the Society.

The first plaque celebrated the centenary of the present building of the pub and the second celebrated the Bourne itself with the wording ‘near this site runs the subterranean BOURNE, or woe water, which floods parts of the Purley, Caterham and Coulsdon valleys traditionally every seven years and foretells national disaster’.