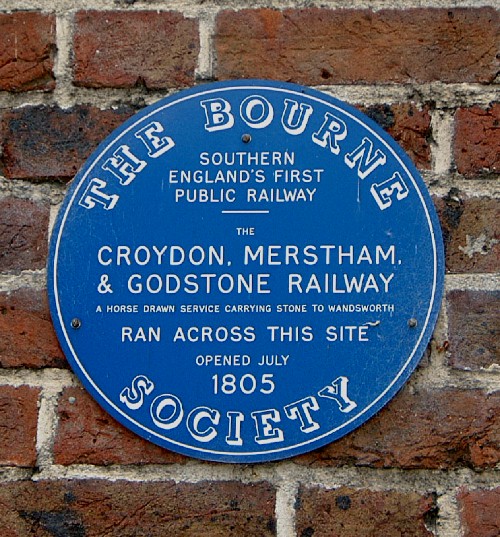 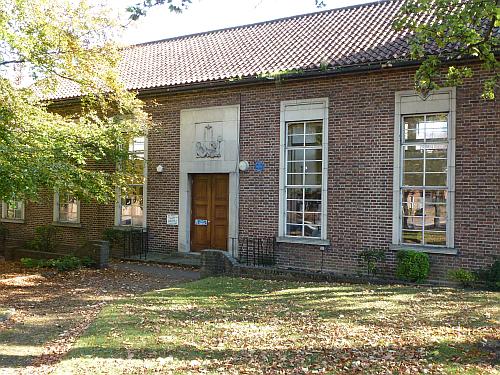 This commemorative plaque was installed on the wall of the Purley library in time for its unveiling by a Croydon borough representative on 24th July 1993. Present at the unveiling, arranged and organised by Purley’s chief librarian, were five representatives of Croydon Corporation, including Adie Scott, Chief Librarian for the Borough.

Also attending were members of the Bourne Society’s Council. This was the first unveiling where the recipients of the plaque financed and arranged its installation, though the cost of the plaque itself was borne by your Society.

The weather was dull, but the rain held off as the large gathering crowded round to hear three short speeches relating to the site of the Croydon, Merstham, and Godstone Railway, which ran across what is now the green in front of the entrance to the library in Purley. After the unveiling, the party went inside the library to view a special exhibition of old photographs and documents relating to the iron railway, which was due to remain for several weeks afterwards.

The wording on the plaque can be seen from the photograph, and there are details of the course of the railway in Bulletin 152 (May 1993) as well as in specialist books. The Society extends its thanks to the London Borough of Croydon for permitting the plaque’s installation, and for arranging a distinguished unveiling ceremony.