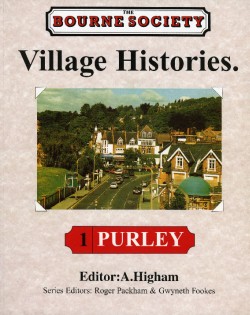 To indicate this service a sign was displayed outside the shop. For the National Telephone Company it was a square enamelled sheet showing a bell (like a church bell) with the initials of the Company. Another sign carried the words ‘You may telephone from here’. The earliest examples in Purley were in 1904, at the estate agents Slade and Church -Croydon 386- in Station Approach. In 1905 Tom Houghton, the tobacconist at 2 Kimberley Terrace, offered the facility. In 1908, Slade and Church were at 2 The Exchange—still Croydon 386. By 1911, the directory listed five locations for public use: two in the same shops as in 1908; two in the Post Office (from which trunk calls—long distance—could be made), and an ordinary telephone at Purley Station.

Summoning emergency services was difficult before the introduction of the telephone. There was a call system for the Ambulance, visible in a photograph taken in Godstone Road in 1937. It seems to resemble a fire alarm, where operating a switch rang a bell in the ambulance Station. It had probably not been used for many years. The 1911 London Telephone Directory lists under Purley, ‘Fireman (Parish Council Brigade), 11Bartletts Cottages -Telephone P .0. Purley 402’, so that if a telephone could be found the Brigade could be summoned to a fire. The services of the operator were required until the 999 call system came into operation (in 1950 in the Purley area). The introduction of the red coin-box telephone kiosks enabled calls to be made much more easily.

When in 1980 the business of the Post Office was divided into separate parts, British Telecom plc was created. Soon after this, public telephones were removed from inside Post Offices, and all the red telephone kiosks in Purley were replaced by new BT -designed boxes, including ones operated by phone cards. With the introduction of competition in 1982, Mercury telephone points appeared -one outside the National Westminster Bank in Russell Hill Road and another in Brighton Road, near the junction with Grovelands Road. BT’s response to this was to provide more kiosks in the central Purley area -outside the National Westminster Bank in Brighton Road and in High Street.

In the early years of the telephone service poles carrying wires were a familiar sight in Purley and Coulsdon. The National Telephone Company could not obtain permission to disturb footpaths to bury cables, so they were forced to use an above-ground system. The Post Office, being part of the Civil Service at that time, was given powers to bury cables. The monopoly gained by the GPO in 1912 allowed all cables to be buried, so later the overhead lines and poles were removed. In some parts of Purley a modem form of overhead wiring is used for the final part of the connection, instead of underground wiring emerging at the front wall of the house.

Telephone directories have grown in size as the network has expanded. In 1911 a single directory contained details of all the subscribers in what is now the Greater London area. By the 1960s Purley subscribers were included in the North East Surrey directory, but the number of subscribers is now so great that Purley is included in a directory covering only the London Borough of Croydon area.