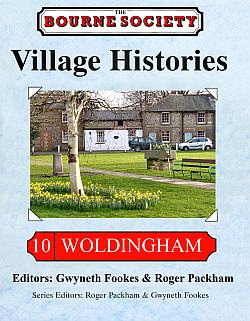 ……Woldingham lies between two Roman roads which are reckoned to date from about AD100. To the east lies the road to Lewes which roughly follows the route that later became the boundary between Kent and Surrey. The other road probably ran through Croydon, along the Caterham valley, over Tilburstow and ended on the South Downs. While these major roads by-passed Woldingham, minor roads probably criss-crossed the area and Nore Hill continued to be the focus of attention during Roman times. The evidence comes from pottery, a bronze coin of the second-century emperor, Antoninus Pius, and a number of bronze brooches from the surrounding area. For other finds, John Aubrey writing in the early 18th century, when describing Woldingham as containing ‘nothing worthy of remark’, went on to mention the discovery of a small copper coin of Constantine the Great ‘being thrown out of a rabbit burrow in the field of one Mr Haywood’.3 A coin of Marcus Aurelius, who also ruled in the second century, was found near St Agatha’s Church. Granville Leveson Gower of Titsey Place exhibited the coin at the Society of Antiquaries in 1895 but it has since disappeared. Two Roman brooches found around 1800 at Upper Court were sold to Leveson Gower, with similar results.

The Romans left Britain in AD410 leaving the local people to fend for themselves. As part of this process, some communities employed Saxon mercenary soldiers to protect them from other invaders. Croydon was one of the first places where such mercenaries were stationed, probably guarding the Roman road that linked London to the South Downs. Having settled in and around Croydon, the Saxons and their descendants gradually spread out into the surrounding countryside and further finds from around Nore Hill have included Saxon disc brooches dating from the fifth to the sixth centuries. Early Saxon pottery was found at Henley Wood, Chelsham, and a bronze stirrup mount dating from the end of the Saxon period was found on Halliloo Farm. Significantly, the name of Woldingham, like most of our local villages, is Saxon in origin……

‘Very few Londoners know that there is so near to them a land of pure air and sunshine where health may be restored and life brightened…..’?

The village of Woldingham we know today is due in large part to William Gilford. In 1880 he bought the manor and two farms of which the parish consisted at that time and set about drawing up plans for the infrastructure and building plots to create homes for those wishing to escape the pollution of London. Joseph Kitchin the previous owner of the manor and farms was heavily mortgaged and had been trying to sell the estate for more than a decade. The fact that the building of the railway had begun made the future development of the village a more viable proposition and William Gilford took up this opportunity.

William Gilford was born on 28th June 1827 at Thorpe Satchville, a village 5 miles south of Melton Mowbray, Leicestershire. In 1851, when he was 23 years old, he was working for a clothier at a shop in Finsbury. In 1855 he married Ann Lot at Hastings, Sussex, who was born at Southwark, Surrey around 1836. Shortly after the marriage he returned, with his bride, to Leicestershire where he opened a shop, a hatter’s, at Corn Hill, High Street, Melton Mowbray. They had four children at Melton Mowbray – Margaret, William, John S and Hastings – before moving in around 1863 to Bethersden, Kent a small village five miles west of Ashford. They had three more children at Bethersden before Ann died at the beginning of 1868.

William married his second wife later in 1868, being Elizabeth Esther Akhurst who had been born at Canterbury, Kent: she was 23 years his junior. They married at Ashford, Kent, where their first child Evelyn was born. William and Elizabeth moved to Redhill where their second child, Percy, was born towards the end of 1870. They were living at Melton Lodge, Gloster Villas, Bridge Road, (presumably named after his former home) and William’s occupation is given as retired hosier and glover in the 1871 census. He was 43 years old and seven of his nine children were living at home. At this time he had started buying property……