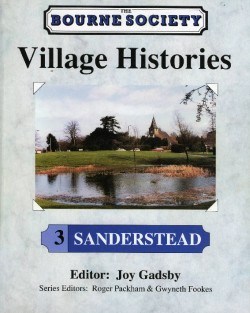 Various specialist trades and professions associated with construction also appeared as the building boom developed. In 1902 H. R. Houchin, architect, set up offices by the station in Sanderstead Road, though only temporarily. In 1905 A. Wunderlich, electrical engineer, moved into ‘Cuyahoga’ in Mayfield Road and E. B. Trigg, architect, into ‘Leonora’ in the same road. In 1910 James E. Tuke, engineer, moved to ‘Clappersgate’, 18 Mayfield Road. In the 1920s a number of lawyers moved into the parish.

The Development of the Shops by Sanderstead Station

The growth of population to the north of the parish led to the appearance of a new shopping area, which became of much greater significance than Kensington Place.

The fortunes of the first shopkeepers varied. Alfred Lye, at No.1 at the north end of the parade, opened in 1901, opening a sub-post office the next year. He seems to have prospered from the start, continuing in business until 1927. From 1912 to 1920 he also ran a fruiterer’s at No.3. Other original shopkeepers were less fortunate and most shops changed hands one or more times during their first few years of operation, though in most cases the trade carried on in the shop remained unchanged. In the case of No.5, the fishmonger’s, there seem to have been six changes of ownership between 1908 and 1921, with Harrison and Co. alternating with Arthur Ramkin. Among the more successful were Alex Oswald, who started his business as a ‘fly proprietor’ in Glossop Road in 1909, and opened an office in the newly built No.8 in 1911. By 1913 he was calling himself a ‘cab proprietor’. He continued to operate from that office until about 1930.

One of the most important developments-and one that can be regarded as marking the establishment of Station Parade and Station Approach as a significant commercial and shopping area-was the opening of a branch of the London Joint Stock Bank at No.9 in 1911. Through mergers the bank later became the London Joint Stock and Midland Bank and then, about 1925, the Midland Bank. The branch continued there until the 1980s. In 1930 the second bank, Barclays, opened in Station Parade at Nos.12 & 13.

By the time of World War I the pattern of ownership had settled down and in 1916 James Relf opened his nursery in Purley Oaks Road, nearer to the station than to the old village. In 1921 the first garage was opened, the ‘Sanderstead Motor Works’, owned by G .S. Vellacott and located in Sanderstead Road, just south of the junction with Broomhall Road. It is a garage to this day, although under different ownership.

In about 1928 three additional lock-up shops were built in Station Approach. In 1930 two little shops were built in St Mary’s Road, the first occupied by a dry cleaner’s. The second about 1932 was the first base of Dick Townley’s sports outfitters, which moved in 1934 to Station Approach, and later to Cranleigh Parade, where it is still to be found.

In 1925 Costain started to develop the huge estate in Selsdon, and it recognised that local shopping facilities were essential. The first block of five shops called ‘The Broadway’ was built in 1926, followed by a second in 1927. In order to enable the new shopkeepers to become established while the population grew, Costain gave the original shopkeepers of each trade an undertaking that they would have no direct competition for a number of years. This was successful in helping the shopkeepers, but local housewives complained that some shopkeepers exploited their monopolies, with high prices and poor quality. The strategy did succeed in getting shops open fairly quickly. By 1928 there were six shops open, the five in ‘The Broadway’ and the wine shop across Addington Road, on the corner of Old Farleigh Road. These first shops comprised, in addition to the wine shop, a dairy, a butcher, a chemist, a tobacconist and confectioner (which was also the first post office, though only for about a year), and a ladies’ hairdresser.