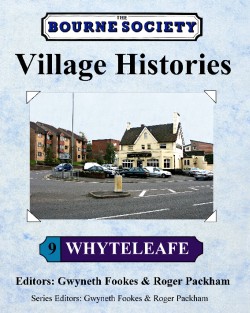 It was as early as 1869 that a local entrepreneur thought up the idea of getting a gasworks built in the valley to supply gas to a growing community. He reasoned that a site near to a railway (the top line, to Oxted, was not yet built), and opposite a limeworks (the Riddlesdown Quarry), and near a stream (the Bourne) would be ideal, and Mr Young duly sold some of his surplus land for such a development. So Gashouse Lane was born, opposite the Old Barn to the south of the quarry itself opposite the Rose & Crown Inn. After the demise of the gasworks, the road name reverted to Old Barn Lane.

It was four years before the first gasholder was erected on the site (now the elf petrol station), with mains pipes laid under the dirt road to Caterham, and a further three years before a second holder was put up next to it. In 1896 the gas main beneath the road was upgraded to twelve inches diameter, and a year after that further land was purchased, on the other side of the road, and a third gasholder put up pretty much on the site where one stands to this day. At about this time, more land for gasworks use was bought alongside this new gasholder.

In 1905 the Whyteleafe Gas Works were taken over by the Croydon Gas Company, which soon relinquished the site after dismantling the two gasholders on the west side of the Godstone road. They kept the land on the other side, and the South Eastern Gas Board put up a new gasholder in 1953, using the nearby buildings to house equipment to add a distinctive smell to the gas. This was required by law when the area changed from town gas (with its natural noxious odour) to natural gas (which has very little smell in its natural state). SEGAS became part of British Gas plc when privatised in the early 1980s.

Kenley waterworks started life in 1869, and they extended their main supply pipe along the Godstone road into Whyteleafe within fifteen years. Cottagers in Welcomes Terrace, and other named terraces nearer to the crossroads in central Whyteleafe shared the costs of a mains connection by having a single delivery pipe serving two or more cottages: a there are still a few where this remains the case to this day. If next door pulls the chain while you are having a shower . . .

In 1885 was born the East Surrey Water Company, by amalgamation with existing companies in Kenley and Caterham; they still obtain their water from boreholes in the chalk, which once again has a rising water table with rains in the 1993-94 season exceeding expectation. This followed a longer period of comparative drought, though water has always been found at the bottom of wells without drilling deeper still. Peak flow in the Bourne itself was found in 1928, never yet exceeded!