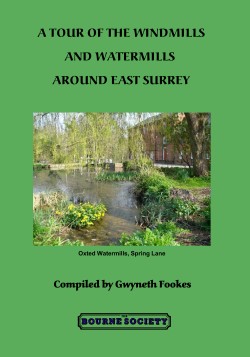 A Tour of the Windmills & Watermills around East Surrey

1) TQ 329554. About 300 yds west of The Golden Lion and approximately at the southern ends of Wood Lane and Heath Road. 2) TQ 325563. Only shown on the Rowed map. Phillip Burkin of Chaldon who died on 30 January 1934 remembered the mill being pulled down. All Chaldon corn was ground at the Caterham windmill and the offal was taken to the two windmills on Coulsdon Common.

Beadle’s Mill – TQ367586. About 60 yds south of Mill House on the same side of ChelshamRoad, formerly Mill Lane. An old post mill existed near The Hare and Hounds, and the site is preserved by ‘Mill House’ and the open heath below, called ‘Mill Common’. Chelsham mill is marked on Rocque’s map in 1764, and was burnt down in about 1840. We learn from a parish register that Philip Lacres, aged 32, miller, was killed by the mill sail at Chelsham in 1803. John Phillipson purchased the property (Sale Notice, Croydon Library) for £710 in March 1827 at a time when the mill was described as being in excellent repair and so well equipped that it would have cost £800-£1000 to construct. It had two pairs of stones, ‘patent spring’ sails, and was described as ‘twenty-four feet in her Crossbeams’ (crosstrees).

1) TQ 320572. Where Windmill House now stands, Stites Hill Road. 2) TQ 320571. On the south side of Stites Hill Road in an enclosure on the Common. Two mills stood on Coulsdon Common for over a century. The earlier and smaller postmill was shown on Rocque’s map of 1764. A 1777 map also shows only one mill, but the second is said to date from that year. Richard Dewdney – well known in milling circles – owned them from 1780 until just after 1800, when he was succeeded by James Dewdney until about 1826. They were being offered for sale in 1849 when the small mill was considered to be worth £350 and the large one £500. The new – larger – mill was modernised soon after this. In 1872 the old mill was in a dilapidated condition and it was probably demolished soon after 1880. Its oak centre post was sawn up and used in the hall of Coulsdon Court and a millstone is embedded in the ground in front of Windmill Cottage, where the miller lived. Up to 1885 local directories gave George Tutt as miller at Coulsdon Mills, but the ‘s’ was dropped from then on. The new mill was finally demolished in 1924. Timbers from the new mill – and millstones – ended up at a house called Woodhouse Copse, Holmbury St Mary, near Dorking, now a concert venue. The post of the mill forms the centre-post of a spiral staircase in the private part of the house. A window in ‘Woodhouse Copse’ has an engraving stating—

Also engraved are the names of some of the craftsmen involved, and a rather stylised smock mill.